Balance analysis for treatment effects was introduced in Stata 14. 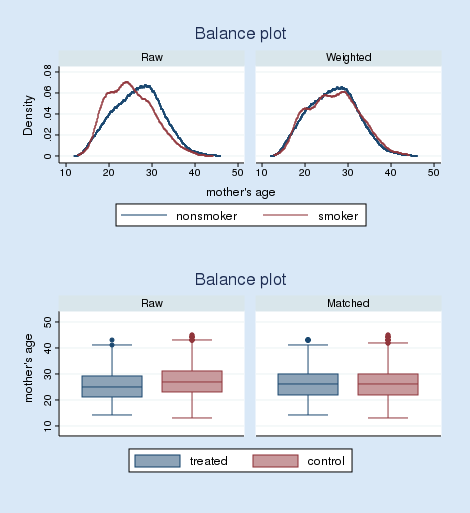 In experimental data, treatment groups must be assigned randomly, meaning characteristics across groups will be approximately equal.

If the reweighting is successful, then the weighted distribution of each covariate should be the same across treatment groups. In such cases, we say that the treatment model "balanced" the covariates.

We can examine whether the treatment model balanced the covariates and perform a statistical test.

Three diagnostics and one test are provided.

Say that we estimate the effect of smoking during pregnancy on infant birthweight using an inverse-probability-weighted (IPW) treatment-effects estimator.

We assume that treatment (smoking during pregnancy) is determined by marital status, the mother's age, attendance to prenatal care during the first quarter of pregnancy, and whether this is the mother's first pregnancy.


We find that the average treatment effect (ATE) is -240 grams.

Have we done an adequate job of balancing the covariates so that we can trust the estimated treatment effect?

We could use the overidentification test:

We cannot reject the null hypothesis that the covariates are balanced, and that's good.

We can look at the various diagnostics (and in real life, we probably would have used the diagnostics before using the statistical test).

tebalance summarize reports the model-adjusted difference in means and ratio of variances between the treated and untreated for each covariate:

Ignore the raw columns, at least to begin, and focus on the weighted columns. Differences in weighted means are negligible, and variance ratios are all near one. The Raw columns show where we started, and, before weighting, differences were large.

tebalance can show us pdfs or box plots so that we can examine the entire distribution. Below we have put the graphs produced by tebalance density and tebalance box together:

Tests and diagnostics confirm that our model balances the covariates.

To find out more about checking for balance after teffects or stteffects, see [TE] tebalance.

Read the overview from the Stata News.

Upgrade now Order Stata
Back to the highlights