Power and sample size was introduced in Stata 13. 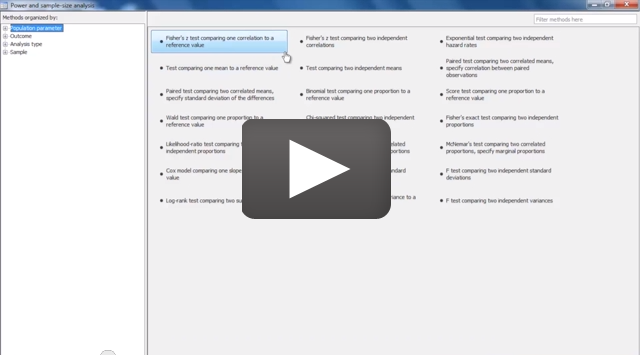 Say we are planning an experiment to determine whether students who prepare for the SAT exam obtain higher math scores by (1) taking classes rather than (2) studying independently. The national average math score is 520 with a standard deviation of 135. We want to see the power obtained for sample sizes of 100 through 500 when scores increase by 20, 40, 60, and 80 points or, equivalently, when average scores increase to 540, 560, 580, and 600.

We assumed above that those studying independently would obtain the national average of 520 and that the standard deviations would be 135 for both groups. We could relax either assumption using the power command.

We might be more interested in the sample size necessary to detect the increased scores at power levels of 0.8 and 0.9. In that case, we type

We can even estimate the detectable increased scores over the range of sample sizes and powers:

If we prefer to see the detectable limits as effect sizes (difference between the experimental group mean and the control group mean) rather than experimental-group test scores, we add option y(delta) to the command:

In this graph, the effect size is calculated as (experimental group mean - 520).

And see the worked examples: