Effect sizes were introduced in Stata 13.

See the latest version of effect-sizes. See the new features in Stata 17. 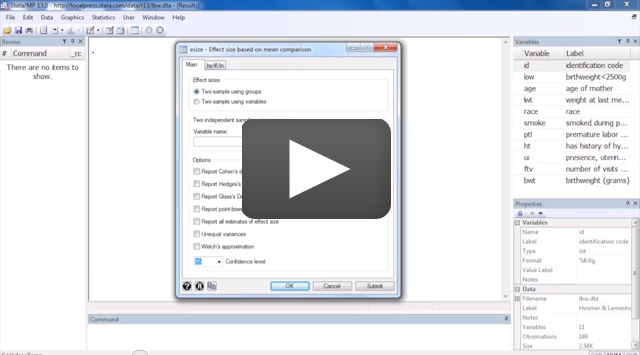 esize, esizei, and estat esize calculate measures of effect size for (1) the difference between two means and (2) the proportion of variance explained.

Say we have data on mothers and their infants' birthweights. We want to calculate the effect size on birthweight of smoking during pregnancy:

We find that the difference in average birthweight is about 0.4 standard deviations.

We can reasonably assume birthweight is normally distributed; thus the reported confidence intervals are appropriate in this case.

In many cases, normality cannot reasonably be assumed. In such cases, we can obtain bootstrapped confidence intervals:

Effect sizes based on summary statistics

When you have summary statistics but not the underlying data, as you might when reading a journal article, you can use Stata's immediate command. Let's pretend our birthweight example was published. The hypothetical article recorded that for the 115 mothers who did not smoke, the average birthweight was 3,054.957 grams (sd=752.409) and that for the 74 smokers, the average was 2772.297 grams (sd=659.8075). We type

We can use the estat esize postestimation command to calculate effect sizes after fitting ANOVA models.

We fit a full factorial model of newborn birthweight on mother's smoking status and whether the mother saw a doctor during her first trimester:

We can obtain the proportion of variability explained (effect sizes) measured by η2 or ω2. Here is the default η2 measure:

Reported are full and partial η2 values along with their confidence intervals. We would have obtained similar output had we requested the ω2 measure.

We can also use the estat esize postestimation command to calculate effect sizes after fitting linear models.

We replace the insignificant drvisit variable with the continuous variable age and fit the model using linear regression.

This time, we request the ω2 estimates of effect size:

If we did not have the data to estimate this model but instead found the regression fit published in a journal, we could still estimate the overall η2 and ω2 from the model's degrees of freedom and the summary statistic that F(3, 185) = 4.55. We could type