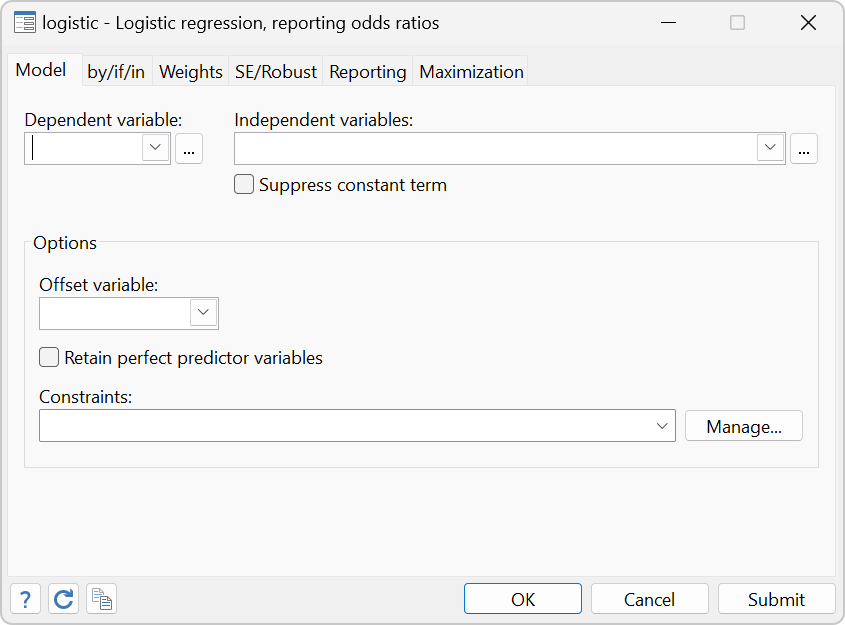 Once a model has been fitted, you can use Stata's predict to obtain the predicted probabilities of a positive outcome, the value of the logit index, or the standard error of the logit index. You can also obtain Pearson residuals, standardized Pearson residuals, leverage (the diagonal elements of the hat matrix), Delta chi-squared, Delta D, and Pregibon's Delta beta influence measures by typing a single command. All statistics are adjusted for the number of covariate patterns in the data—m-asymptotic rather than n-asymptotic in Hosmer and Lemeshow (2000) jargon. Every diagnostic graph suggested by Hosmer and Lemeshow can be drawn by Stata. 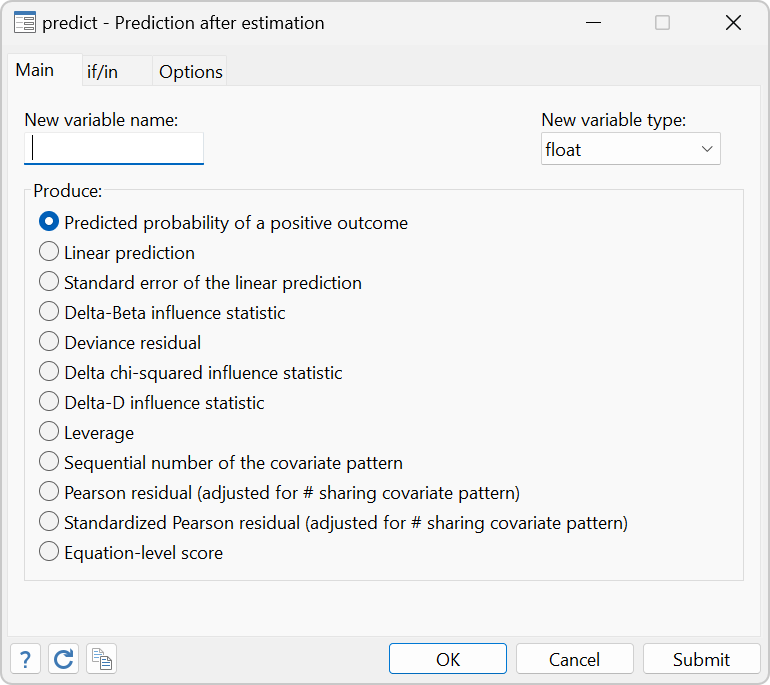 Also available are the goodness-of-fit test, using either cells defined by the covariate patterns or grouping, as suggested by Hosmer and Lemeshow; classification statistics and the classification table; and a graph and area under the ROC curve.

Stata’s mlogit performs maximum likelihood estimation of models with discrete dependent variables. It is intended for use when the dependent variable takes on more than two outcomes and the outcomes have no natural ordering. Uniquely, linear constraints on the coefficients can be specified both within and across equations using algebraic syntax. Much thought has gone into making mlogit truly usable. For instance, there are no artificial constraints placed on the nature of the dependent variable. The dependent variable is not required to take on integral, contiguous values such as 1, 2, and 3, although such a coding would be acceptable. Equally acceptable would be 1, 3, and 4, or even 1.2, 3.7, and 4.8. 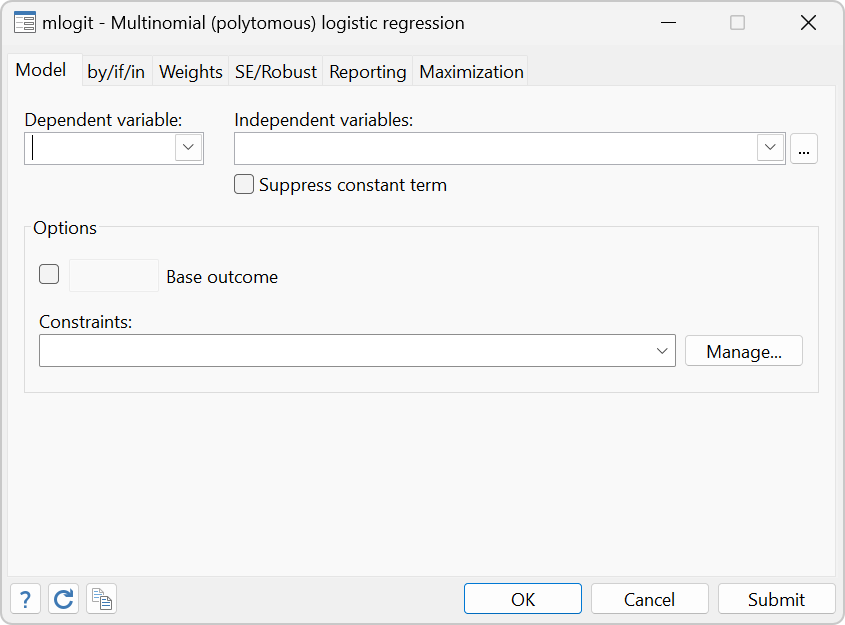 Stata’s clogit performs maximum likelihood estimation with a dichotomous dependent variable; conditional logistic analysis differs from regular logistic regression in that the data are stratified and the likelihoods are computed relative to each stratum. The form of the likelihood function is similar but not identical to that of multinomial logistic regression. Conditional logistic analysis is known in epidemiology circles as the matched case–control model and in econometrics as McFadden's choice model. The form of the data, as well as the nature of the sampling, differs across the two settings, but clogit handles both. clogit allows both 1:1 and 1:k matching, and there may even be more than one positive outcome per strata (which is handled using the exact solution). 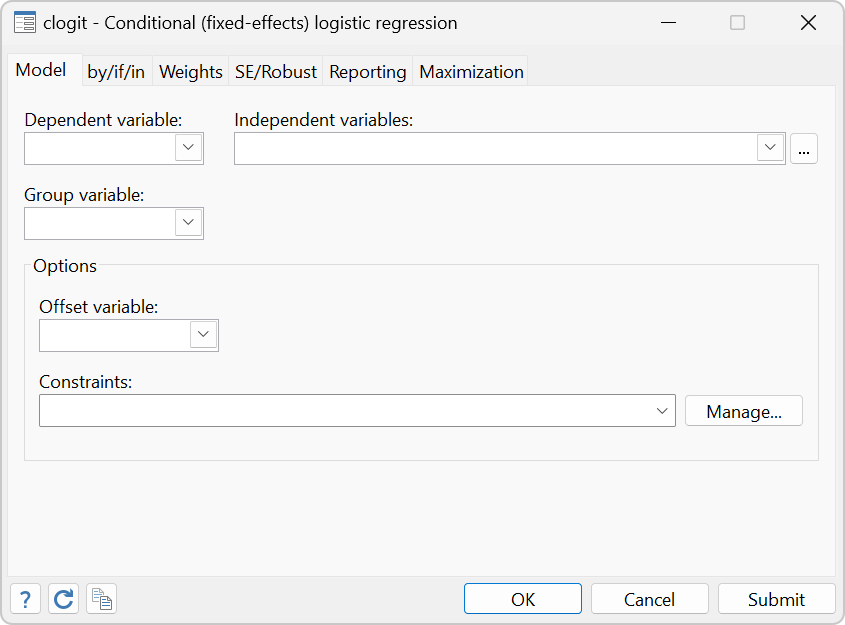 Stata’s ologit performs maximum likelihood estimation to fit models with an ordinal dependent variable, meaning a variable that is categorical and in which the categories can be ordered from low to high, such as “poor”, “good”, and “excellent”. Unlike mlogit, ologit can exploit the ordering in the estimation process. (Stata also provides oprobit for fitting ordered probit models.) As with mlogit the categorical dependent variable may take on any values whatsoever. 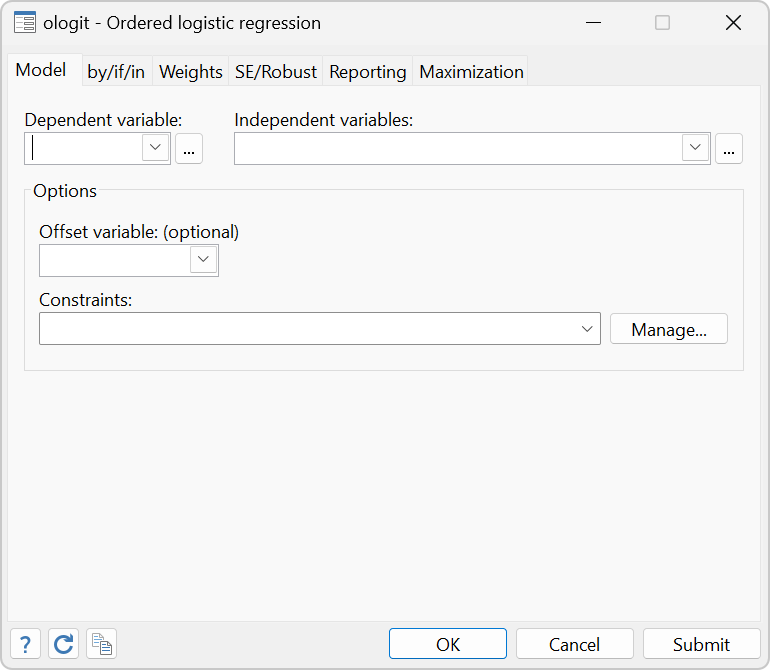