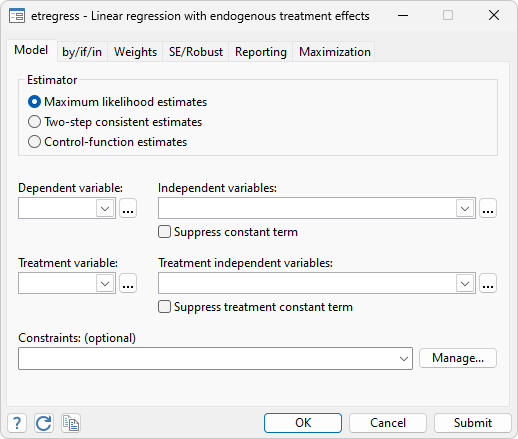 We estimate the ATE of being a union member on wages of women with etregress. Other outcome covariates include wage, school, grade, and tenure. Indicators for living in an SMSA—standard metropolitan statistical area, being African American, and living in the southern region of the United States are also used as outcome covariates.

The estimated ATE of being a union member is 2.95. The ATET is the same as the ATE in this case because the treatment indicator variable has not been interacted with any of the outcome covariates.

When there is a treatment variable and outcome covariate interaction, the parameter estimates from etregress can be used by margins to estimate the ATE. Now we use factor-variable notation to allow the tenure and black coefficients to vary based on union membership. We specify the vce(robust) because we need to specify vce(unconditional) when we use margins below.

The ATE of union membership is now estimated with margins. The “r.” notation tells margins to contrast the potential-outcome means for the treatment and control regimes.

The estimate of the ATE is essentially the same as in the original model. Now we estimate the ATET of union membership with margins. We specify union in the subpop() option to restrict estimation to the treated subpopulation.