Stata’s pca allows you to estimate parameters of principal-component models.

We typed pca price mpg ... foreign. All Stata commands share the same syntax: the names of the variables (dependent first and then independent) follow the command's name, and they are, optionally, followed by a comma and any options. In this case, we did not specify any options.

Having estimated the principal components, we can at any time type pca by itself to redisplay the principal-component output. We can also type screeplot to obtain a scree plot of the eigenvalues, and we can use the predict command to obtain the components themselves.

screeplot, typed by itself, graphs the proportion of variance explained by each component: 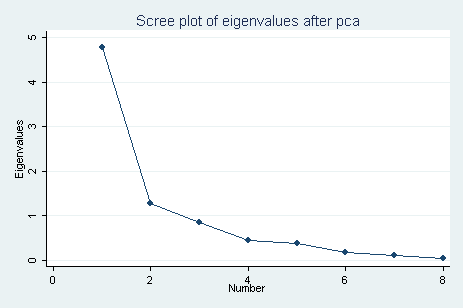 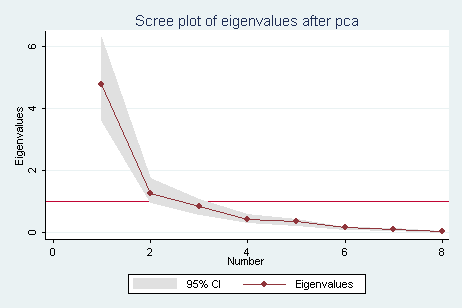 We can obtain the first two components by typing

The score option tells Stata's predict command to compute the scores of the components, and pc1 and pc2 are the names we have chosen for the two new variables. We could have obtained the first three factors by typing, for example, predict pc1 pc2 pc3, score.

An important feature of Stata is that it does not have modes or modules. We typed pca to estimate the principal components. We then typed screeplot to see a graph of the eigenvalues — we did not have to save the data and change modules. Similarly, we typed predict pc1 pc2, score to obtain the first two components. The new variables, pc1 and pc2, are now part of our data and are ready for use; we could now use regress to fit a regression model.

The two components should have correlation 0, and we can use the correlate command, which like every other Stata command, is always available for use. To verify that the correlation between pc1 and pc2 is zero, we type