Stata makes it easy to graph statistics from fitted models using marginsplot. marginsplot graphs the results from margins, and margins itself can compute functions of fitted values after almost any estimation, linear or nonlinear. 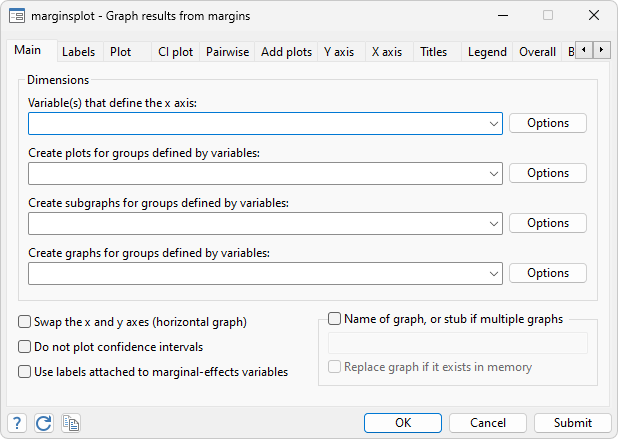 Suppose we’ve just fit a two-way ANOVA of systolic blood pressure on age group, sex, and their interaction. We can estimate the response for each cell with margins:

To study the interaction it would be nice to see a graph. We use marginsplot:

marginsplot also supports the features of the margins command, including the contrast operators. Let’s contrast women with men in each age group and plot the contrasts:

marginsplot works with nonlinear models, too. Suppose we've fit a logistic regression, modeling the probability of high blood pressure as a function of sex, age group, body mass index, and their interactions. marginsplot can contrast women with men on the probability scale:

We’ve only scratched the surface—anything that margins can compute, marginsplot can graph.