Stata fits fixed-effects (within), between-effects, and random-effects (mixed) models on balanced and unbalanced data. We use the notation

That is, u[i] is the fixed or random effect and v[i,t] is the pure residual. 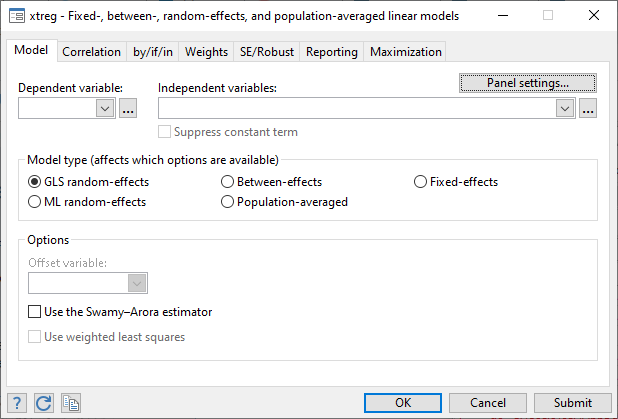 In this case, the dependent variable, ln_w (log of wage), was modeled as a function of a number of explanatory variables. Note that grade and black were omitted from the model because they do not vary within person.

Our dataset contains 28,091 “observations”, which are 4,697 people, each observed, on average, on 6.0 different years. An observation in our data is a person in a given year. The dataset contains variable idcode, which identifies the persons — the i index in x[i,t]. Before fitting the model, we typed xtset to show that we had previously told Stata the panel variable. Told once, Stata remembers.

To fit the corresponding random-effects model, we use the same command but change the fe option to re.

In addition, Stata can perform the Breusch and Pagan Lagrange multiplier (LM) test for random effects and can calculate various predictions, including the random effect, based on the estimates.

Equally as important as its ability to fit statistical models with cross-sectional time-series data is Stata's ability to provide meaningful summary statistics.

xtsum reports means and standard deviations in a meaningful way:

The negative minimum for hours within is not a mistake; the within shows the variation of hours within person around the global mean 36.55956.

xttab does the same for one-way tabulations: