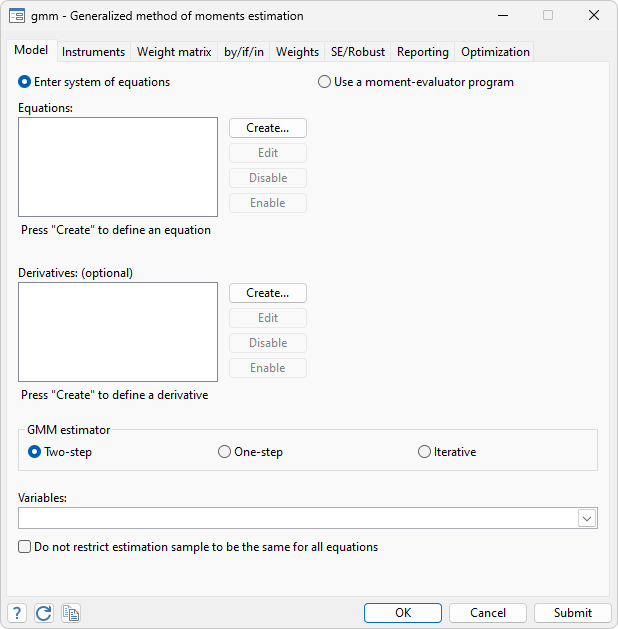 Here we fit a Poisson model of the number of doctor visits as a function of gender, income, and whether a person has a chronic disease or private health insurance. We have reason to believe that income is endogenous, so we use age and race as instruments.

When fitting a model by GMM, you should check to see whether the instruments you use really satisfy the orthogonality condition—i.e., whether they are uncorrelated with the errors. In GMM estimation, Hansen’s J statistic is the most common test statistic. In our example, whether our instruments are valid is certainly open for debate—age likely influences the number of doctor visits—and we can test their validity by using estat overid to obtain Hansen’s J statistic:

The notation {xb:private chronic female income} is a shorthand to create a linear combination of variables; we could have specified {xb_private}*private + {xb_chronic}*chronic + {xb_female}*female + {xb_income}*income and declared each parameter explicitly. By using the shorter notation, we need only specify the derivative with respect to the entire linear combination instead of each parameter individually. Moreover, once we declare our linear combination, we can subsequently refer to it as xb: without having to specify the variables associated with it.

In addition to standard instruments, gmm allows you to create panel-style instruments used in dynamic and other panel models with endogenous regressors. In these models, you typically use lagged values of regressors as instruments; the number of lagged values available increases as the time dimension increases. gmm’s xtinstruments() option makes creating these instruments a snap.

For more complicated analyses, gmm allows you to write a program to evaluate your residual equations instead of using substitutable expressions. These programs are structured like those that ml, nl, and nlsur use. Here is our Poisson model fit using the moment-evaluator program version of gmm:

The programmable version of gmm is eminently flexible. You just need to tell it how many moment equations you have and the number of parameters in your model. You can optionally specify instruments and select the type of weight matrix to use and standard errors to report.