The use of panel-data models has exploded in the past ten years as analysts more often need to analyze richer data structures. Some examples of panel data are nested datasets that contain observations of smaller units nested within larger units. An example might be counties (the replication) in various states (the panel identifier). Other examples of panel data are longitudinal, having multiple observations (the replication) on the same experimental unit (the panel identifier) over time. xtgee allows either type of panel data.

Stata estimates extensions to generalized linear models in which you can model the structure of the within-panel correlation. This extension allows users to fit GLM-type models to panel data. 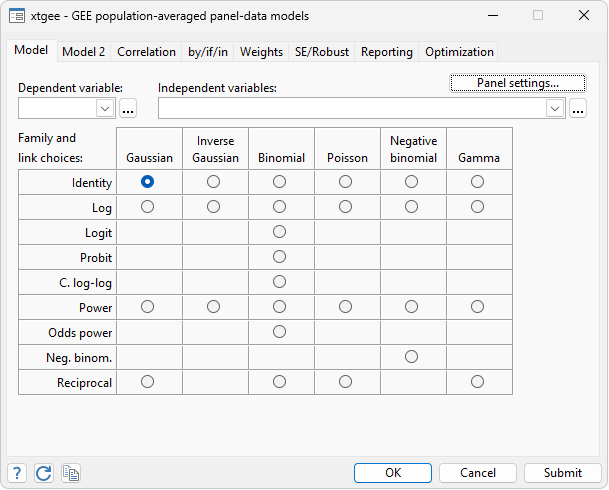 xtgee offers a rich collection of models for analysts. These models correspond to population-averaged (or marginal) models in the panel-data literature.

What makes xtgee useful is the number of statistical models that it generalizes for use with panel data, the richer correlation structure with models available in other commands, and the availability of robust standard errors, which do not always exist in the equivalent command.

In this example, we consider a probit model in which we wish to model whether a worker belongs to the union based on the person's age and whether they are living outside of an SMSA. The people in the study appear multiple times in the dataset (this type of panel dataset is commonly referred to as a longitudinal dataset), and we assume that the observations on a given person are more correlated than those between different persons.

Assume an independent correlation structure that ignores the panel structure of the data. Under this assumption, xtgee will produce answers already provided by Stata’s nonpanel estimation commands. Examples of situations when xtgee provides the same answers are given in the table shown below.

If you choose to model the intracluster correlation as an identity matrix (by specifying the name of an existing identity matrix in the option corr), GEE estimation reduces to a generalized linear model, and the results will be identical to estimation by glm.

We could fill up lots of space demonstrating other ways that xtgee is equivalent to other features of Stata, but the real power is in using it for its intended use and modeling the correlation that exists in the panels.